Hello and Welcome,
This is a portfolio focus on cool climate Syrah from @AmalieRobert Estate. A FLOG Communication.
Tucked into the center of our 35 acres of estate grown vines is block 13, our little acre of Côte Rôtie. Ernie was confident that he wanted to grow Syrah and Viognier. Dena said OK, but you can only have 1 acre – no more. The fortuitous siting occurred when opportunity and preparedness met face to face with luck. 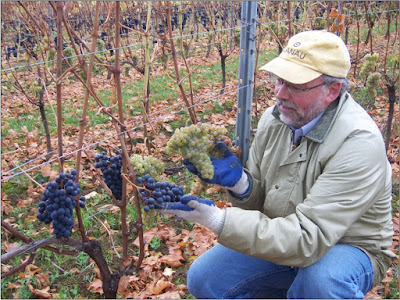 Having Dick Erath wander around your property before planting anything was also quite fortuitous. With Dick’s help, we selected the warmest, most sheltered little spot to nurture our Syrah and Viognier. But what clones of Syrah to plant? And how do you know?

A most fortuitous adventure to Burgundy included a detour to the Northern Rhône. In the little town of Ampuis we were once again face to face with opportunity, preparedness and luck. But this time our fountain of knowledge was Marcel Guigal. And that brief encounter provided the answers to “What clones of Syrah to plant? And how do you know?” The vineyard at Amalie Robert Estate was planted to 1,188 Syrah (4 clones) and 297 Viognier vines in 2003.

All of the local growers thought Ernie was daft. “Yeah, sure, go ahead. Let us know how that works out for you! Ha!” If you have met Ernie, you know he doesn’t really run with the traffic. He was simply more “encouraged”. The 2007 Amalie Robert Syrah was selected for the “The Year’s Best American Syrahs” by Wine & Spirits Magazine with a 93 point rating. And in 2008 our Syrah had a new name: “Satisfaction”. And that’s how it worked out for Ernie.

And as time went by, slowly at first, the vines did their part in growing their root systems and colonizing the soil. They were gaining vine age. And Ernie was doing his part, tending the Syrah vines to their own schedule and waiting for the optimal harvest window. Harvest for cool climate Syrah, as it turns out, is optimally executed in November at Amalie Robert Estate.

The resulting wine, maturing in barrel at the 24-month mark, was hauntingly familiar. As if we were transported back to the Guigal cellars in Ampuis tasting La Turque from barrel. The vintage was 2010, and at that revelation the reserve Syrah program was born – Top Barrel Syrah. 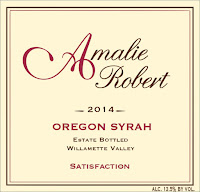 “Amalie Robert, whose vineyard is in the western part of the Willamette Valley, makes a very strong case for Syrah, but production of their two graceful wines is painfully small, as in just a few barrels of wine per vintage.” - Josh Raynolds, Vinous, February 2018

Both the Satisfaction and Top Barrel Syrahs are 100% estate grown and indigenously fermented with a significant portion of stem inclusion. While the Satisfaction Syrah represents the four clones alluded to above and a wee bit of interplanted Viognier, the Top Barrel Syrah is a single barrel and quite often a single clone. But Ernie’s not telling which of those 4 fortuitous clones it is. 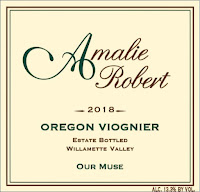 However, he will tell you, in excruciating detail, how he harvests the 12 row Syrah block moments before the arrival of the growing season-ending rains: clone by clone, 3 rows at a time. And what about the interplanted Viognier? It goes in the harvest buckets right alongside the Syrah. That’s just the old world having its way with the new world. C'est la vie.

It was the spring of 1999 when we happened upon Bob and his Montmorency cherry orchard. We had been studying soils and climate in the Willamette Valley and doing our level best to evaluate as many wines as we could. It didn’t take too long before Ernie said, “Bob, I got here too late. You have your cherry orchard sitting on top of my vineyard.”

We chose the Willamette Valley because it was the last best place on the planet to grow Pinot Noir. All of the other planets had one issue or another - soils, climate or the proximity to established markets were some of the most significant drawbacks.

And so it began. April of 1999 is when we became cherry growers for just long enough to bring in the harvest. From there on out, our singular focus was to develop our 60 acre property into a world class vineyard and traditional winemaking operation that we would own and operate ourselves.

The benefit of starting with a cherry orchard is that you are not buying someone else’s vineyard and their deeply rooted mistakes. You have the opportunity to make your own mistakes - and learn from them. From those humble beginnings we decided on our own rootstocks, vineyard spacing, trellis design, varieties of wines to grow and their specific clones. We learned how to farm wine to showcase the inherent qualities of our vineyard. We had help from some great and patient mentors including Bruce Weber, Dick Erath, Mike Etzel, Steve Doerner, and many, many others.

When it came time to design the winery, we only wanted to build one, so we found the best architect with the most experience in the Willamette Valley and that was Ernie Munch. Aside from the aesthetics and site placement, the guiding principle was gravity flow. Our crown jewel is the 1,200 tons of below grade concrete that maintains our naturally climate conditioned barrel cellar and the 500 or so barrels entrusted to mature our wines.

And what about the name? Amalie Robert is a combination of Dena's middle name, “Amalie” (pronounced AIM-a-lee) and Ernie's, “Robert.” We are them.