Hello and Welcome,
This is an Amalie Robert Estate Update: Repositioning iPinot in the Time of COVID-19. A FLOG Communication from Dena and Ernie. Willamette Valley Pinot Noir from Amalie Robert Estate.
“May you live in interesting times” is an English expression that is often used in irony. In that, quality of life is usually better in uninteresting times of status quo versus the disruption and unrest our country is currently experiencing. Air travel is a case in point where an interesting flight is often less safe than an uninteresting flight. Surely, we are leading interesting lives in the time of COVID-19. We hope you are safe and well. We are tucked into the vineyard and winery like ticks on a hound dog. 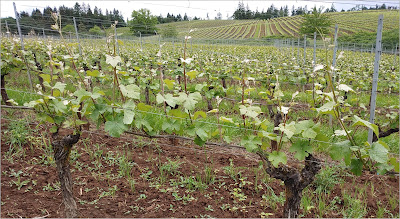 COVID-19 has provided many people, including us, an opportunity to focus and pay close attention to what really is important. This graphic helps explain the relative importance of several factors impacting the human condition during COVID-19. Some items are relatively unaffected, such as the need for a cup of freshly brewed morning accelerant. What may have changed is the source from where this beverage is derived. The term “Homebrew” has taken on a new significance. 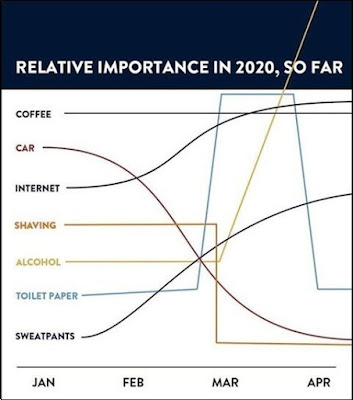 We see the need for a vehicle or mundane daily activities such as shaving to be of less importance. This may in fact be dependent on other factors, such as one’s employment status or location of said employment. Daily grooming habits represent a slippery slope as we will see next as we examine sweatpants and internet usage.

Correlation and causation are unreliable bedfellows. As we can see from the graphic, both the use of the internet and choice of sweatpants are highly favored. That does not necessarily mean one is dependent upon the other. However, both could be dependent upon the social expectations in play during traditional work hours or ZOOM calls. (I would stand up but I am wearing sweatpants, or no pants at all!) Or maybe surfing the internet is more enjoyable in sweatpants. Clearly, wearing sweatpants does not create a desire to surf the internet. While correlated, causation is difficult to prove with a high level of confidence.

And then there is the panic mode shopping, also called pantry stuffing. Toilet paper was the first item in this category to gain notoriety. Daily grooming habits can ebb and flow from day to day, but personal hygiene is a different matter. Next came hand sanitizer followed by masks, sneeze guards and disposable gloves. As time goes by, these items will return to their normal level of importance, however there will always be an extra roll or two tucked in behind the bath towels, just in case.

And that brings us to the Adult Recreational Beverage category. As the yellow line on the chart indicates, right about the start of March there was a steep and sustained level of importance placed in this category. At times we can look to social influencers, such as Martha Stewart, to impact behaviors and trends. They can add a level of comfort in knowing you are not the only one enjoying an Adult Recreational Beverage, or two. The real difference is that you had the presence of mind to discontinue internet activities during the social hour. 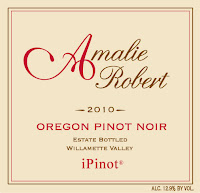 Repositioning iPinot for the New Normal - the COVID-19 Pivot. Our reading of the tea leaves is that the impacts of COVID-19 are going to have a half life that lasts quite some time.

We introduced iPinot to the marketplace in two ways. The first is from Amalie Robert Direct. We sell this Pinot Noir via internet distribution everywhere it is legal for us to do so. You might be surprised to learn that there are still a few states that do not allow their citizens to receive wine shipments directly from wineries. Currently, these states are Delaware, Mississippi, Oklahoma, Rhode Island, and Utah.

The second way to experience iPinot, until COVID-19, was as a “by the glass” offering at select restaurants. Our goal in offering iPinot for a glass pour program was to build brand awareness for Amalie Robert. The restaurant landscape has since changed, significantly. And no one really knows when or how the restaurant business is coming back. People must feel comfortable in the presence of other, unknown people in a somewhat confined space.

There are a lot of moving parts throughout the country and local ordinances play a significant role. However, our goal remains the same. We intend to continue offering a compelling wine that represents an excellent value and that wine is iPinot Pinot Noir.

And now, instead of enjoying a glass “out” at a fine dining establishment, you can enjoy a glass “in” at your very own fine dining establishment. Or maybe it is Tuesday night book club and a glass of iPinot. Then there is Wine Wednesday with Martha and the girls – you can even post to social media. Thursday is the unofficial start to the weekend, and iPinot fits that bill quite nicely.

Starting today, and for the foreseeable future, we are offering iPinot at $120 on six bottles or more with domestic ground shipping included. Just click on the Big Blue Button to browse available vintages or collect them all!

Note: You will not need a promo code to activate pricing. The pricing will automatically adjust when you select six bottles of iPinot and there is no further discount on iPinot. The shipping will be adjusted upon confirmation of your order. This is our contribution to the human condition, yours and ours. If you have any questions or need assistance, please E-mail Dena at Cuvee@amalierobert.com.

Dena & Ernie
Posted by Amalie Robert Estate at 10:30 AM